The geology of the Danish landscape contains clear traces from the ice ages millions of years ago. The ice shifted the layers of earth around and created the many hills and valleys we have in Denmark. This also contributes to Denmark being an especially good place to go on a fossil hunting adventure. In Naturpark Lillebælt, Trelde Næs and Røjle Klint are prime location for a good fossil hunt.

If you go fossil hunting, be aware that certain fossils are so special, they count as Danekræ and thus belong to the Danish state. In such a case, you can turn in the fossil at museums all over the country, after which you will receive a finders fee depending on how special the fossil you found is. Also note that everything under the sea is property of the Danish state, so keep your fossil hunt above the surface of the sea.

Fossils are the remains of animals who lived millions of year ago. When something dies, nature most often breaks down the body and over time, the earthly remains disappear, but fossils are nature’s way of preserving its history. Even though we keep finding fossils all over the world, only a very small number of organisms actually become fossils. It requires some very specific conditions before nature creates a fossil. If an animal is buried in sand, mud, clay, etc., quickly after death, there is a chance it will become fossilised. If there is hard material in the organism, it will be more easily preserved, whereas soft materials, such as hair, skin, muscle tissue, feathers, etc., rarely become part of a preserved fossil. When the remains of the animal lies under the protective layers of sand, it leaves an impression in the sand, which the fossilisation process can work around. If there are holes in the organism, minerals will fill them out. While the sand becomes harder, the remains of the animal are broken down, leaving an impression of the animal, which we can find millions of years after it was created.

When fossil hunting, you might want to bring tools to get a closer look at the fossils you find. Remember to be careful and safe.

Fossils should fit in your hand. Do not use a hammer on flint, as it is dangerous if the stone shatters. 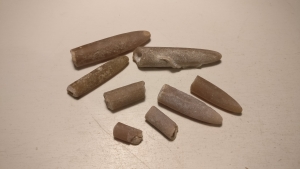 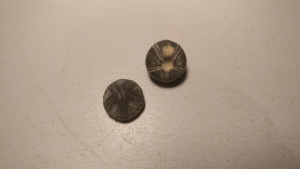 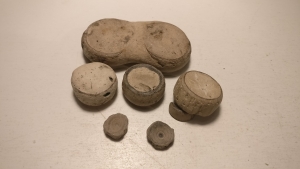 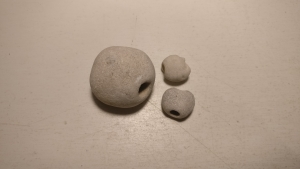 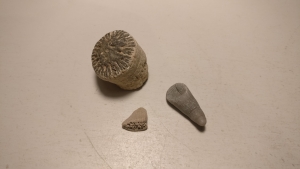 In the past, people believed that certain fossils were the result of harsh weather or magical creatures. What we today recognise as a fossilised sea urchin, also has the Danish nickname Tordensten, meaning Thunder Stone. This is because people believed that they were the result of thunder striking the Earth, due to the star markings. As lightning rarely strikes the same place twice, people also believed that keeping a Thunder Stone in their window sill would prevent thunder and lightning from hitting their house. Additionally, people also believed that belemnitida fossils were the tip of lightning bolts, which hit the Earth.

However, belemnitida are known in Danish as Vættelys, meaning Wight Candles, and received their name from supernatural creatures. The Wights are a species of troll or druid, who supposedly lives underground. However, the long thin fossils are neither lightning nor candles, but rather the fossilised remains of an ancient squid called the belemnite, which lived during the Cretaceous period.

Humans have always found fossils, but it took centuries before science discovered how fossils actually develop. Yet, many of the most famous philosophers, writers, and scientists throughout history had theories about how fossils came to be. The ancient Greeks came to the correct conclusion that fossils were the remains of fauna from the past, but as Christianity took over, God was dragged into the creation of fossils.

Through the Middle Ages, the Renaissance, and the Age of Enlightenment, many of the world’s smartest people actually believed that fossils were proof of the Biblical Flood, and that fossils were the remains of animals whom Noah did not bring on his Ark. Therefore, fossils were used as propaganda for how the human impurity killed innocent animals.