Listen to the Little Belt

Listen to the Porpoises Under the Surface

Come take a trip under the surface, and listen to another world in a new way. Naturpark Lillebælt collaborates with researchers from Aarhus University in regards to providing new experiences and learning opportunities.

The goal is to get us to care about life under the sea.

Listen to the Little Belt 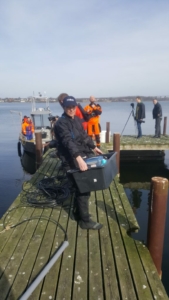 Now you can get even closer to the porpoises living in the Little Belt.

The world’s first online listening station available to everyone, is now open at Old Harbour in Middelfart. Here you can board the wheelhouse by the Lillebælt Shipyard all 24 hours of the day and listen to life beneath the surface.

Preparations for the listening station commenced in March 2017, where researchers from Aarhus University, technicians from the English firm Seiche, and Naturpark Lillebælt’s nature guide, Annette Weiss, laid out a 200 metre long listening cable on the ocean floor by Sildemarken.

“[It was a hard, but fun project. It was hard to rattle around with a concrete tile at the bottom, which the cable had to be tied to. The water was 4°C, and after an hour in the water, I was good and cold.

Diving wise, it was a difficult and hard project. But it was weighed up by the fact that Thursday evening, we could hear that the porpoises were tossing around in the water.

We could sit and watch all of the clicking noises on screen and hear them. It was all worth it. We had been through the whole range of emotions that day. Excitement, frustration. And at the end, joy that it succeed]”, states Annette Weiss, who aside from being a nature guide, was educated as a professional diver.

Now the cable is at the bottom of the Little Belt, and it will hopefully pick up the sounds of porpoises and the ships in the strait.

The data is to be used for a research project about the effects of noise on porpoises, explains senior researcher at Aarhus University, Jonas Teilmann.

“[The researchers are curious to know what determines when the porpoises are near Middelfart, and if it is determined by current, temperature, salt content, or noise from the ships, etc. It is supposed to help us understand the porpoises’ living conditions, and how we protect them, so they will be in the Little Belt in the future. Another important part this project gives us, is that we can broadcast everything that goes on under the surface with a 24-hour live access to the life in the Little Belt]”, explains Jonas Teilmann.

The underwater microphone, which the English firm, Seiche Ltd, sponsored, is the first of its kind, which everyone has access to.

It is located in the Little Belt near the stone reef by the diving club “Marsvinet”. The sound of the Little Belt comes via a sea cable to a loud speaker in the wheelhouse of the Lillebælt Shipyard.

The organisation the Lillebælt Shipyard has renovated the wheelhouse and put voluntary hours in the project.

Meanwhile, Marine Science & Consulting, a non-profit research company is working on putting out a measuring buoy in the same place in the Little Belt, which is to measure salt, temperature, and current conditions in the Little Belt.

Both this and the listening station will kick off a big research project, which will show how the ecosystem in the Little Belt functions, and how we can improve the conditions, so for example the cod and other important fish return in the same numbers as previously.

The fact that there are so many collaborations around the listening station thrills the director of Naturpark Lillebælt, Johannes Lundsfryd.

“[Middelfart is one of the best places in Denmark, if one wants to see porpoises, because one can see them from the coast, when they come to the surface to breath

Now one can also hear them when they swim by. We fundamentally believe that we are getting better at protecting nature when we understand it, and the new listening station helps with that]”, says Johannes Lundsfryd and continues, “[This collaboration is a super example of what we want to do in Naturpark Lillebælt.

We connect new knowledge and understanding with an exciting experience, which one can also enjoy with one’s children. I believe that it will be very fascinating and a real experience. For there are no guarantees. Even though we have one of the densest populations of the small whales, there is no knowing if they are there the first time one pops by. So much greater is the potential to experience, the day one can hear the clicking noises and look out of the window and see porpoises leaping in the current]”, says Johannes Lundsfryd.

The data, which the listening cable collects from the Little Belt, gets sent to and saved in a database named Viden om Lillebælt (Knowledge of the Little Belt). Here, apps and websites can collect sounds, temperature data, current data, etc.

As more data is collected, one can visualise and communicate in regards to seasons, current conditions, and the presence of ships – to the delight of visitors and to great gain for researchers.

Naturpark Lillebælt functions as project coordinator and creates the mediation with the help of partners – including Middelfart Museum, Fredericia Museum, VisitMiddelfart, Middelfart Municipality, and researchers from Aarhus University, DTU Aqua, and SDU.

As the listening station was inaugurated on the 29th April 2017, crowds of seal- and whale interested researchers came to Middelfart. The inauguration occurred simultaneously as European Cetacean Society’s big aquatic mammal conference in Middelfart. 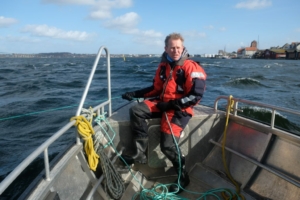 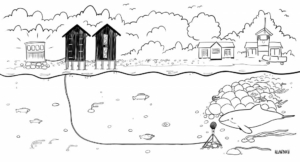 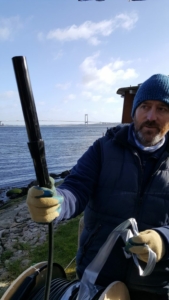 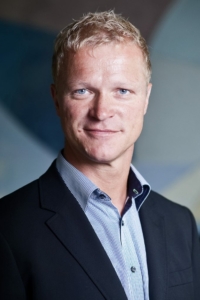 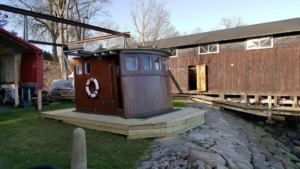 The wheelhouse at Old Harbour, home of the new listening station

Naturpark Lillebælt and the Collaboration with Researchers

As a pilot nature park, Naturpark Lillebælt has through the years collaborated with several researchers from different research institutes to acquire knowledge of the unique ecosystem of the Little Belt. By researching the collaborations between the dramatic current conditions, plant plankton, and the occurrence of fish and porpoises, researchers can determine the connections within the ecosystem – for the benefit of all the Danish seas. In the Little Belt, it is possible to measure a lot of paradigms on a small aquatic area, and the measurements here are very clear, as many things happen in the Little Belt.

Facts About the Porpoise in the Little Belt

The Little Belt is known for its large population of porpoises, which one can often see from both coast and boats. Here, more than 3,000 animals gather in a small area, and therefore it is one of the places in the world with most whales living in a small aquatic area. This is due to the very specific ecosystem in the Little Belt.